The paper lanterns were hung, the lights were up. and lots of moon and star cut outs decorated the walls. Yaseen smiled. The house sure looked liked Ramadan now. Everywhere he’d gone in the past week, people seemed to be talking about Ramadan – how they planned to wake up early to fast, how they would donate stuff for charity and even how much food some of them had frozen so as not to waste time cooking in this holy month! Yaseen didn’t think he had ever been more excited for Ramadan.

This year his parents had told him that he could fast as many days as he wanted to, maybe even the whole month if he was able to. And it would be the very first time his little sister would be attempting to fast. Yaseen had tried to tell his sister Aisha what she should expect while fasting, but he wasn’t sure if she fully understood it. Anyhow, he was going to make certain that she was okay when she fasted, and keep her busy the whole time.

Yaseen just noticed that Aisha had sneakily slipped out, while he was talking about the Ramadan decor. ‘Where did she go?’, he wondered as he went to go find her. He looked in her room, but she wasn’t there. Next he tried his parents’ room, but he didn’t find her there either. He called out for her but she didn’t respond. Suddenly, he remembered her favorite hiding spot, and went to see if she would be under her desk. Aha! There she was huddled under a blanket!

‘Aisha, I’ve been looking all over for you! What’re you doing under there?’, he asked as he crawled under the desk to join her.

‘Nothing’, she said quietly.

Yaseen looked at her closely. Her face looked like she’d been crying. ‘What’s wrong Aisha?’, he asked gently.

His sister looked at him sadly and said, ‘I know it’s almost Ramadan, and that I should be happy. But I’m just so worried, Yaseen! Everybody keeps saying “MashaAllah Aisha, you’re old enough to fast this year” , but I’m not sure that I’ll be able to fast! And they seem so sure of me doing a good job. But what if I get hungry? Or what if I forget and eat something? Won’t that be really terrible?’

Yaseen smiled. ‘You know Aisha, it’s not easy to fast for the very first time. I remember the first time I tried to fast I forgot that I was fasting, and drank some water by accident! But Mama said Allah forgives us if we eat unknowingly while fasting.’, he explained.

‘But what if I get hungry and I really want to eat, Yaseen? What then?’, Aisha asked.

‘Hmmm, that’s a tough question. I think if you keep yourself busy, or maybe take a nap it helps to make the time pass faster. But Daddy said that you can try half -fasts at first, remember?’, Yaseen told her.

‘Oh you’re right! I forgot about that! So maybe if I start with a few half-day fasts, that would make it easier for me to try the all-day fast, right?’, she asked perking up.

‘Exactly! That’s how I got used to fasting too. In fact, I was just about your age when I tried my first half-fast!’, explained her brother.

Aisha smiled. She felt so much better knowing that she would have a chance to practice for a few days before attempting an entire fast. ‘I think Mama and Daddy and everyone will be so proud of me for fasting! Right, Yaseen?’, she asked excitedly.

‘Definitely. And I’ll be proud of you too! And do you remember what Daddy told us? He said that Allah is very happy when we fast for His sake*. And Allah rewards us so so very much. So much that we can’t even begin to imagine how much!’

‘As much as to the moon and back much?’, asked Aisha opening her arms really wide to show her brother.

‘Even more than that!!’, Yaseen answered smiling.

Aisha was happy now and hugged her brother tight. ‘Thanks for talking with me, Yaseen. You’re the best brother ever! And this is going to be the best Ramadan ever! Do you want to go blow up some balloons with me?’, she asked crawling out from under the desk.

‘Sure!!’, replied Yaseen and they both went to blow up balloons and add a little more color to their Ramadan decoration.

*The Messenger of Allah (peace and blessings of Allah be upon him) said: “Allah said: ‘Every deed of the son of Adam is for him except fasting; it is for Me and I shall reward for it…’”  (Bukhari 1761) 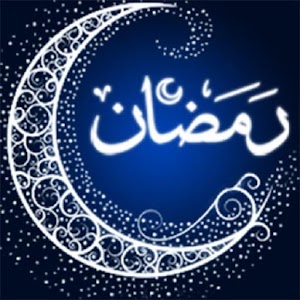